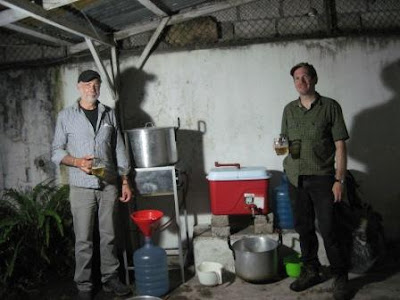 After assembling the makeshift La Cascada Brewery for the past month, last night Jim and I finally brewed batch #1. The recipe is an American Pale Ale that we're calling 'Throat of Fire' -- the Quichua name for Tungurahua, our local active volcano.

The brew session took about 5 hours and pretty much went off without a hitch. Though in taking a brewery through its first batch, there will always be some challenges. The potential problem I'm most worried about is that at mash-out, the wort temperature was in the mid-140f range-- about 10 degrees cooler than ideal for starch to sugar conversion.

Hopefully, by sparging with water at 170f, enough of the malt starches were converted to sugary goodness that will be eaten by the yeast, creating alcohol and magically transforming sweet water to beer.

Typically, brewers check the starch/sugar conversion by measuring the specific gravity of the wort or by doing a starch conversion test. Lacking equipment and materials, we weren't able to perform either of these tests. If the yeast starts metabolizing the sugary wort like gangbusters over the next day or two, we should be ok. If not, next time we'll need to use more hot water during the mash to keep the temperature up. 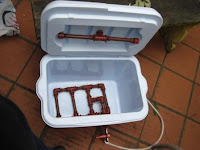 It's been fun using the mechanical side of my brain to assemble the brewery and puzzle through ways to improvise with the limited equipment and materials available here. Building a mash tun from a picnic cooler, complete with a drain manifold and sparging apparatus in the top, has been at the center of our efforts. 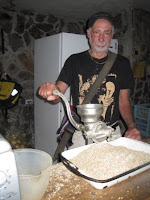 Simply utilizing on-hand equipment and adapting it for brewery use has also been satisfying. A good example is Jim's kitchen grinder. While the grinder is much smaller than a brewer would typically use, we were able to muscle through 20 pounds of two row malt in about in an hour and a half of grinding.

The brewery project has been greeted with universal enthusiasm. Both townies and travelers are thirsty for good beer as Ecuador's beer selection is pretty much limited to a couple of uninspiring lagers. 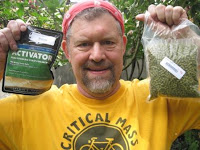 And it's also been great to get support from so many people for launching the brewery, including: the micro-brewers in Quito and Cuenca who have offered input and advice; brewing buddies back in Chicago (especially Josh) who have been a sounding board for ideas and provided guidance; friends like Jay who have brought us brewing supplies from the states; and, most importantly, Gin and Miguel who have been generously tolerant of another project eating up my time!

So, assuming there's enough sugar in batch #1 for the yeast to do its work, Throat of Fire should be ready for tasting in about a month. And if there's not enough sugar to make the yeast happy, it will be back to the drawing board.

Regardless, after an evening of brewing, Jim and I puffed on Cuban cigars in front of the Posada while contemplating the La Cascada de la Virgen de Agua Santa, our brewery's namesake waterfall. Hopefully, in April, we'll be hoisting tasty tankards of 'Throat of Fire' while enjoying the same vista. 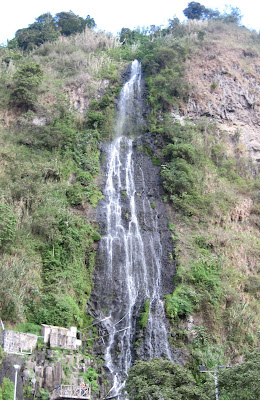 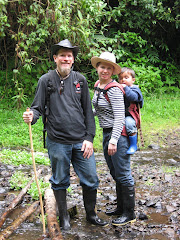